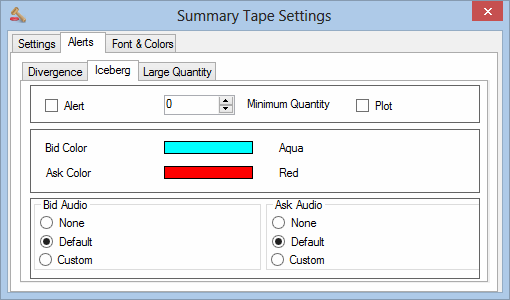 Set to “True” if you want to be alerted when there is an iceberg order being executed. Note that the Iceberg Order will appear as follows:

Initial Limit        Number of contracts when this level became the inside bid.

Note that iceberg detection works for both inside bid and inside ask. This alert will be displayed as soon as the iceberg is detected. More orders may be executed at the level after the alert is issued. Expect the number of orders on the Summary Tape to be different from those on the alert because of this.

Check to switch the alert on.

NinjaTrader -  a small triangle on the chart.

OEC Trader/S5Trader – a small arrow on the chart

This color is used for the chart markers for icebergs on the bid.

This color is used for the chart markers for icebergs on the ask. 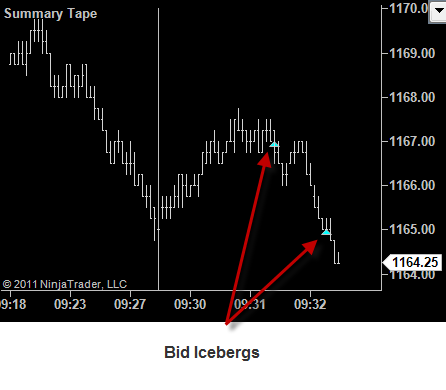 This alert tells you as soon as it detects large quantity of trades hitting a smaller bid/ask. This occurs quite frequently, especially when the initial inside order quantity is small. When you see this alert, go to the Summary Tape and watch what happens, particularly in the case where there is still a decent quantity on the “Curr Lmt”. When the “Curr Lmt” is still a good size (relative to the market), then those are the cases where you will see the accumulation/distribution continue. If on the other hand, you see 500 initial limit, 800 traded and just 2 remaining on limit, the chances are it’s about to move through the level. You need to see continuation of the trading at the level to then decide if someone is truly building a position there.

If someone is building a long position with an iceberg, they need sellers to come in. This gives them someone to buy from and also builds stops above they can exit against. Do not expect to be able to buy when you see an iceberg on the bid and use a 1 tick stop. Very often, the will let the market come down a 4 or 5 ticks (on the ES) before driving it up through the stops with buy market orders. This action gives them more sellers who see the 4 or 5 tick drop as weakness.